Nick Borrelli: From Near Death To Elite Agent

Since Nick Borrelli first joined the Ray White Norwood team, he has gained a reputation as a stellar sales agent whose clients hold him in the highest esteem.

‘Passionate’, ‘professional’, and an agent who ‘achieves outstanding results’, are just some of the words his clients use to describe him. This year Nick’s impressive results also saw him named an Elite Performer in the Ray White Group.

His remarkable success comes down to tenacity, discipline, a drive to achieve and a commitment to putting his client’s needs first.

Behind the scenes, Nick’s journey into real estate reveals the depth of these attributes and more, because his decision to enter the industry was prompted by a brush with death and fueled by a burning desire to make every moment count.

This is Nick Borrelli’s story…

On Monday, September 9, 2013, Nick Borelli’s life began to rapidly unfold. Young, fit, contented in his career and newly in a relationship, he spent the day nursing symptoms of what he thought wasthe flu.

By the end of the week, he would be in a coma with a 10 percent chance of survival, and his family saying they’re goodbyes as a mystery illness began to shut down his organs.

“We had just started dating when Nick came home from work, saying he wasn’t feeling well and put himself to bed,” Nick’s now-fiancée Kellie explains. “Later that night he continued to get worse, so we went to emergency. They gave him a few meds and ran a few tests, but he just got worse and worse.”

By Saturday, doctors opted to place Nick in an induced coma. Kellie was joined by his parents, who had raced to be by his side, and they were told he had a 10 percent chance of surviving the night

“That was tough,” Kellie reflects.

The Search For Answers

Nick’s organs were each placed on individual life support as doctors frantically sought answers. Every test revealed a dead end.

“Even his blood was being cooled by dialysis,” Kellie explains. “He was consistently running temperatures up to the high 40s, so they had to get creative.”

By the 12th day in a coma, Nick’s body was withering away, taking every piece of fat and muscle as energy. He had entered hospital fit, generally healthy and weighing 91kg, but lost 30kg in 15 days and was down to 60kg.

Doctors were running out of options and his family were asked to say their goodbyes.

With hope fading and still no answers as to what illness Nick was suffering, he continued to cling to life.

For those around him, it was interminable waiting game fuelled by the slimmest of hopes a miracle was at hand.

“After 15 days in a coma, Nick came out of it,  Kellie says. “And yes, he was very confused. The footy finals had happened while he was unconscious, and he couldn’t quite work out what was going on.”

Nick was out of the woods, but there was a long journey ahead.

The Long Road To Recovery

Nick’s road to recovery would take a grueling six months. After emerging from the coma, he spent a further eight weeks in hospital and endured months of rehabilitation.

“It was quite emotional,” Kellie explains. “We’d been pulled through the bush backwards. We’d been told he might not survive and wanted every bit of him that we could save, but the recovery was slow.

“Basically, we had to watch him learn to feed himself, walk and do all the things we take for granted.

“Throughout recovery, Nick was incredibly determined. Naturally, he was also very frustrated at the time, and he had to really change his mindset.”

After four months of rehabilitation, Nick finally returned to work, and he came armed with an entirely new perspective.

Although he had been happy in his previous career in produce, his brush with death prompted him to reevaluate his priorities.

“He realised there was so much more to be done,” Kellie says. “He started thinking about where he wanted to go and what he wanted to do, and decided real estate was his aim.”

At the time Ray White Norwood Principal Jason Spagnuolo had just sold Kellie’s property, and she urged Nick to give him a call. Jason and Nick sat down over coffee, and the rest, as they say, is history.

Six months later, with his real estate license in hand, Nick started as a sales agent on Jason’s award-winning team.

In the five years since Nick joined the Ray White Norwood team he has lived and breathed real estate, establishing a reputation as an agent with immense local knowledge, a commitment to open communication and genuine care for his clients.

This year that passion, drive and tenacity enabled Nick to become an Elite agent in his first year as a solo agent.

Within the Norwood office, Nick is renowned as a relatable, approachable, and disciplined team player, who has excelled in all areas of the business.

When asked what his proudest moment in the industry has been so far, it’s not the awards or personal achievements. He says it has been growing a team and watching those around him succeed.

That’s just one indication of his people-focused ethos and genuine appreciation for the support his family, friends and colleagues have offered in shaping the agent he is today.

Medical experts still don’t know the reason for his mystery illness over five years ago but speculate it may have been an infectious virus he came into contact with from someone who had recently been overseas.

In the interim, Nick’s focus isn’t the past but the future. Next year, he will marry Kellie – the woman who stood by his bedside when told there was little chance of survival in 2013, and who has walked beside him in the years since.

In both real estate and life, Nick Borrelli firmly believes there are no excuses. Each day he starts the morning at 4am with exercise, is committed to a healthy lifestyle and pursues his clients interests relentlessly to achieve the best outcome possible.

It’s that persistence, drive, determination and discipline that consistently contribute to his success. Personally and professionally, there’s little doubt Nick Borelli has a bright future ahead. 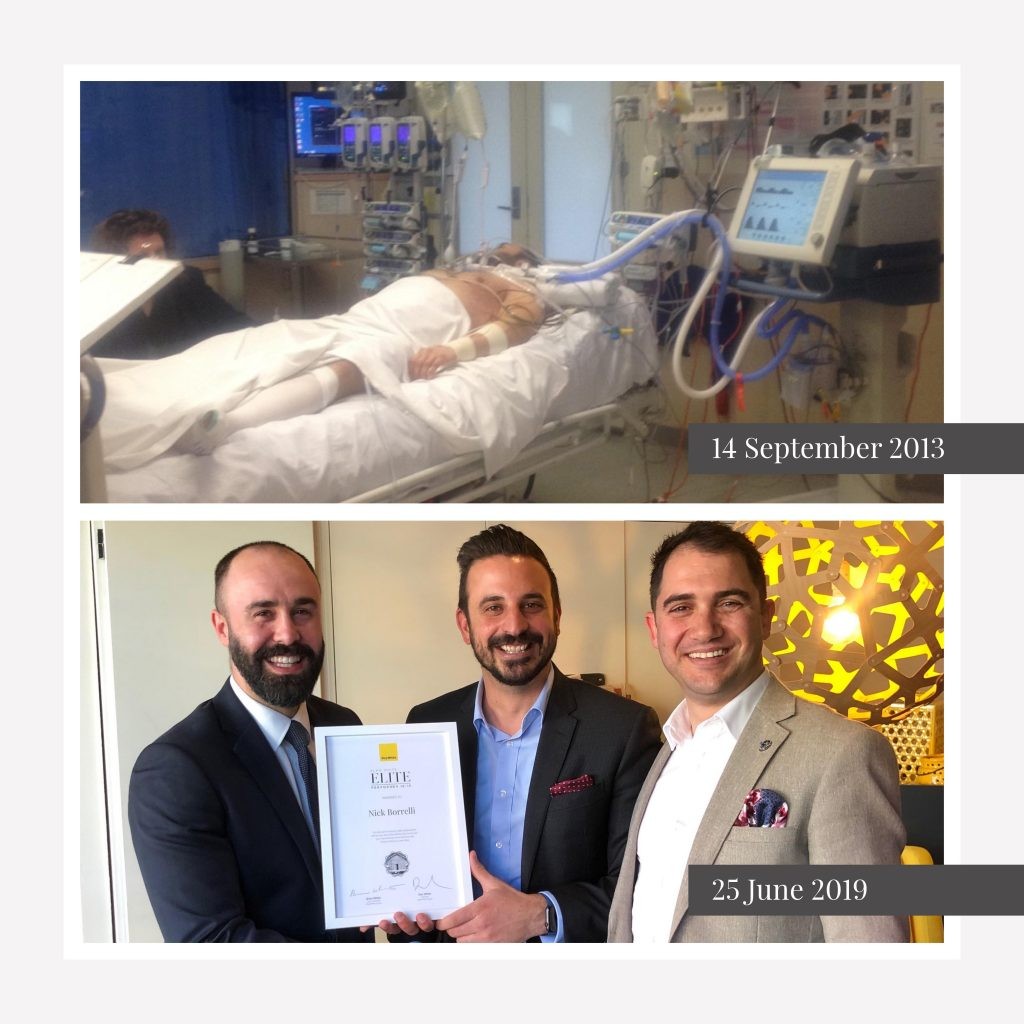